Savory quail, earthy wild rice, a rich and creamy sauce—this casserole is a hit with everyone who tries it. If you can’t find true wild rice, a wild and white rice blend will do just fine. In fact, since true wild rice like that long black grains grown in Minnesota requires prolonged cooking, the wild rice blends that are readily available in the supermarket can be preferred. And yes, the recipe does call for a can of Campbell’s Cream of Mushroom Soup with Roasted Garlic. For the purist out there, feel free to make your own cream of mushroom soup for the recipe if your time allows, but trust me when I tell you it tastes great with the canned version.

To prevent the quail from overcooking and drying out, I prefer to leave them whole. Halved quail will work, but cut the browning time in the skillet accordingly. Use skin-on or skin-off birds, either works well. Use your favorite variety of fresh mushrooms.

For the mushroom gravy and rice

Salt and pepper for seasoning

True wild rice, as I said, takes a while to cook. Start by bringing 4½ cups of water to a boil in a large sauce pan or pot. Add the rice, reduce the heat to a simmer, and cover the pot. Allow the rice to cook for at least 45 minutes, stirring occasionally to prevent sticking. Sample for tenderness—you’ll know if it’s cooked through or not. If your rice isn’t tender after 45 minutes, add an additional half-cup of water and cook for another 10 minutes. Repeat as necessary, going easy with the water. Some wild rices simply take longer to cook to tender than others, but you don’t want to add so much water you’re making rice soup or you end up with mushy rice. For the wild and white rice supermarket blends, follow the directions on the package to yield four finished cups of rice.

While the rice finishes up, heat a quarter-inch of vegetable oil in a skillet over medium-high heat—you don’t want to drown the birds in the oil, nor do you want to deep-fry them—and add two tablespoons of butter to the oil for extra flavor.

Season the quail well with salt and pepper. Brown the birds in batches—i.e., don’t crowd the pan so that the birds are touching—until they take on a golden color. You aren’t trying to cook them all the way through at this point, just give them a nice color. About six to eight minutes per batch should do it. Flip the birds a few times during the process to brown evenly. Lightly brown the quail in a butter and oil mixture over medium-high heat for two minutes per side.

Once the quail have been browned, remove them to a warm platter and drain most of the oil from the pan. Add the mushrooms and sauté for six to eight minutes until they begin to soften and release moisture into the pan.

When the mushrooms are ready, add the soup, cream, and chicken stock to the pan. Bring the sauce to a simmer, check for flavor and salt and pepper to taste. 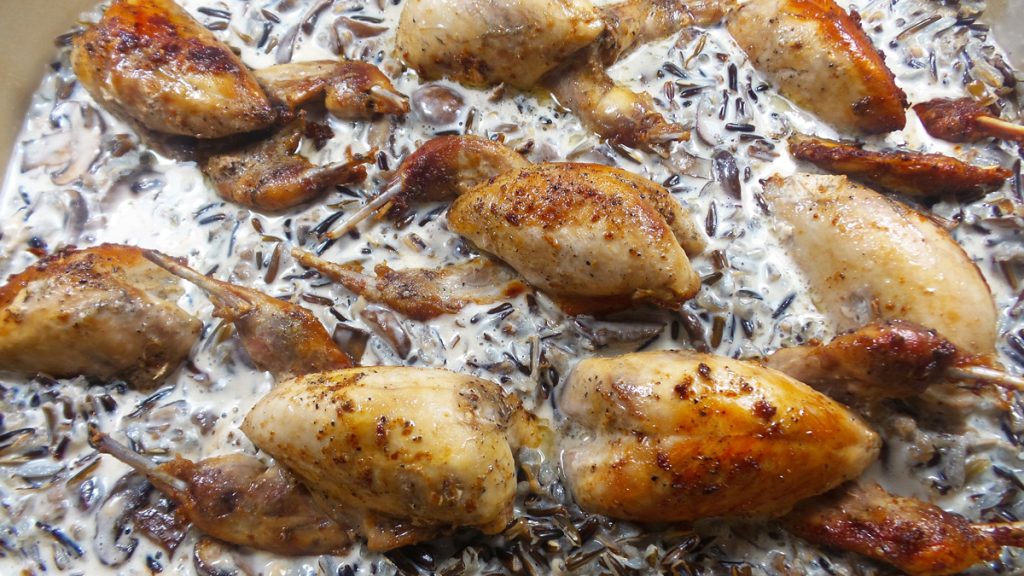 Nestle the browned quail into the rice and gravy mixture, leaving the breast meat exposed.

To assemble the casserole, fluff the rice with a fork and transfer it to a 13×9-inch baking dish. Pour over the mushroom sauce and stir well to blend it with the rice. Nestle the browned quail into the sauce and rice, backside down and leaving the breast exposed. Place the dish into a preheated 350-degree oven and bake for 25 to 30 minutes.